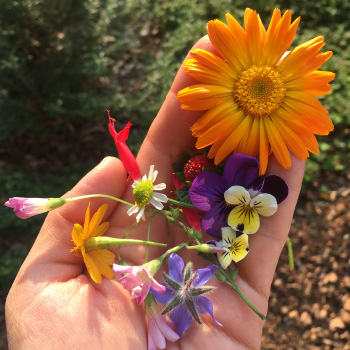 “I like to play indoors better, ‘cause that’s where all the electrical outlets are,” said a young boy in Last Child in the Woods: Saving Our Children from Nature-Deficit Disorder. But since Richard Louv’s book came out in 2005, examining how disconnected children are from nature, both children and adults have only gotten more hooked on digital gadgets and technology. The problem is that as we spend more time in the electronic world, we are spending less in the natural one. If we lose our connection with nature, what might it mean for our planet?

As of 2009, 93% of teens and 77% of adults were online, according to a Pew Internet Project Report. Kids ages 8 to 18 spend an average of 7.5 hours a day, 7 days a week, plugged into computers, TV, video games, music, cells phones, etc. reported a Kaiser Family Foundation Study. An internet security company investigation found that more very young children can play a computer game and open a web browser than swim or ride a bike. Meanwhile there has been a steady decline in visits to U.S. national parks, and a drop in hiking, camping, fishing and hunting.

Today many children and adults suffer from what Richard Louv calls “nature-deficit disorder”— reduced awareness and a diminished ability to find meaning in the life around us. Children no longer have the opportunity to play freely in nature, exploring woods or wading in a stream, and there are fewer natural areas that are accessible. Children’s time is structured, their lives more protected as parents worry about stranger danger, and insect borne diseases and germs. And schools are increasingly cutting back on recess and field trips.

Yet research shows that there are important positive correlations between human health, intelligence and nature. Studies reveal that children are healthier, happier, and perhaps even smarter and more creative when they have a connection to nature. Nature has positive effects on children with attention deficit disorder, asthma, and obesity, and being in nature relieves stress and improves physical health. Adults who work in spaces incorporating nature into their design are more productive, healthy and creative; and hospital patients with a view of nature from their window heal faster.

Our definition of nature needs to be broader. We need to get away from the idea that nature is “out there,” that it’s something you have to go visit, and rethink nature’s role in our cities, stressed Louv in an interview about his new book about adults, The Nature Principal: Human Restoration And The End Of The Nature Deficit Disorder. With over half the world’s population now living in cities, we are facing either the end of meaningful experiences in nature, or the beginning of new kinds of cities and a new definition of nature. According to Louv, conservation is no longer enough—we must also restore or create natural habitats on our farms and ranches, in our cities, neighborhoods, commercial buildings, yards, and on our roofs, to protect the biodiversity that all living creatures, including humans, need.

E.O. Wilson, the renowned biologist, believes that we are hard wired with an innate affinity for nature, a hypothesis he calls biophilia. But research shows that if children do not have the opportunity to explore and develop that biophilia during their early years, biophobia, an aversion to nature, may take its place. Biophobia can range from a fear of being in nature, to contempt for what is not man-made and managed, to an attitude that nature is nothing more than a disposable resource.

If we want to protect our environment and biodiversity, creating opportunities to reconnect with nature is crucial for both children and adults. We need to spend more time unplugged and find ways to let nature balance our lives.

Find small openings for nature every day, whether in the country or the city—at home, in the work place, in schools and in neighborhoods. Plant native species in your backyard and leave part of it wild, take kids fishing and hiking, build a bird feeder or go bird watching, walk in the park, ride a bike, set up a community garden, have a picnic, or exercise outdoors.

The Children & Nature Network supports those working to reconnect children with nature through education, urban design, architecture, conservation, public health and many other disciplines. The website is a rich resource for regional programs, with nature-based ideas and tools for teachers and families, activities, and events.

President Obama recognizes the importance of reconnecting with nature. In April 2010, he launched America’s Great Outdoors Initiative to promote conservation and recreation, based on the idea that “lasting conservation solutions should rise from the American people.”  The America’s Great Outdoors Report, released in February, lays out goals to develop conservation jobs and service opportunities, such as a 21st Century Conservation Service Corps, and supports programs that help kids reconnect with nature and engage young people in conservation. The initiative also seeks to strengthen land and water conservation, establish great urban parks, and preserve natural areas.

“In the end, the fate of biodiversity and ecosystems depends on political choices and individual choices…” wrote Peter Kareiva, the chief scientist for The Nature Conservancy. “If people never experience nature and have negligible understanding of the services that nature provides, it is unlikely people will choose a sustainable future.” Indeed, most environmentalists and conservationists had profound experiences with nature as children that helped shape their future aspirations.

We must make sure the next generation also has the opportunity to have meaningful encounters with nature, because they cannot grow to love nature if they do not experience it.  If children lose their love of nature, who will be the environmental stewards of the future?

Richard Louv concluded,” The natural world’s benefits to our condition and health will be irrelevant if we continue to destroy the nature around us. But that destruction is assured without a human reconnection to nature.”

HOW TO FIND US